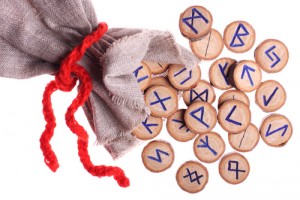 Runes are fascinating ancient symbols that can be used for magical and divinatory purposes. They are usually stored in a bag and then drawn out one by one or cast on a flat surface where they can be ‘read’. Runes have been used as a method of divination since ancient times. They are actually the legacy of an early writing system that was used for Germanic languages, dating back to around 150 AD.

A number of different rune systems were developed, however, they went out of use in middle Europe due to the popularity of the Latin alphabet. As a form of divination, they were used between 100 BC and 1600 AD, however they were soon made illegal by the Roman Catholic Church due to their mystical nature. For centuries after, runes were only known and used by the elite and surprisingly, it wasn’t until the sixties, with the widespread appeal of the “New Age” movement that the runes regained their popularity as a divinatory system.

Modern runes used for divination are traditionally carved into wood, clay, stone tiles, crystals or polished stones. A modern rune set contains 24 stones, each carved with the different letters of the ‘Futhark’ (the runic alphabet) and one blank tile. The blank tile is known as the Wryd or Odin. The 24 symbols have different meanings, but most rune sets will come with a guide which will tell you how to interpret them. Much like reading the Tarot, runic divination is not “fortune-telling.” Runes are an oracle from which one seeks advice, and rune casting should be seen as a tool for guidance.

All that is necessary for a rune reading is the rune set itself, and there are a number of methods that can be considered valid. There are plenty of resources online and in books to help you decide which method works best for you. Runes are cast ideally on an East-West axis or facing the sun. A casting cloth is laid down and used to determine the direction of the casting. From here your focus should lie with the burning question. Open, general questions are more suited to rune readings such as “I’m having problems at work.” The runes will provide you with the direction and guidance needed to make your own decision. The runes are then gently mixed in a bag. They can then either be drawn out one by one or a selected few can be cast over a flat surface.

The way the runes land is important to how they are interpreted. For example if a rune lands upright, it has a certain meaning. If a rune lands upside down, it has a different meaning. A psychic can read the way the runes fall in many different ways and it is up to them to decide how these meanings apply to the question at hand. Some people believe that the selections made within the runes drawn are not really random at all, but choices made by your subconscious mind.

Others believe that they are answers provided by the divine to confirm what we already know in our hearts. Feel free to follow your own instincts when reading runes, but if you need some guidance then call upon specialist Psychic Light readers who can all guide you further in rune readings.