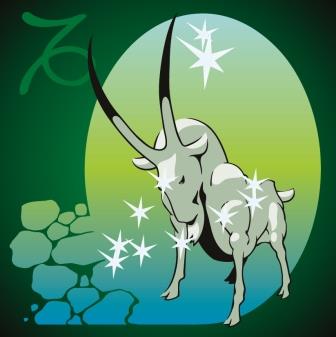 Those born between the 22nd of December and the 21st of January are under the Capricorn Star Sign. They are the tenth sign of the zodiac and are considered to be fiercely independent. They are also one of the astrological top performers, but they achieve in a quiet manner.

The sign of Capricorn is often regarded as being the goat, or a ‘sea goat’. The story behind Capricorns mascot is rooted in Greek Mythology, and the story begins with Pricus, the father of the race of sea goats. The legend states that Pricus’ children found their way from the sea, onto the shore where they began to evolve into the land goats we recognise today. As the father of the sea goat race, Pricus attempted many things to ensure his children never found their way to the shore but nothing prevailed and he couldn’t control their destiny. In his misery, Pricus begged Chronos, the God of Time to let him die, as he couldn’t bear to be the only sea-goat left. Chronos instead allowed him to live out his immortality in the sky, as the constellation Capricorn.

The traits of Pricus can be seen reflected in the character of Capricorn. Capricorns like being in control of their surroundings and everyone around them, believing they can organise others’ lives too. Capricorns are extremely ambitious, but also very patient, and are willing to wait for something they want. They ensure that their goals are well thought out and planned so when they reach their chance to achieve, they succeed at the highest level, not just second rate. A Capricorn not only looks harmless, but also is quite incapable of any serious damage. They take strains, failures and responsibilities quite calmly, without batting an eyelid. Their weakness lies in their inability to trust others easily. They can be prone to periods of moodiness and melancholy, which can be difficult for others to understand. However, a Capricorn is often best left to get on with things by themselves.

Capricorns patience levels make them perfect for dealing with difficult tasks, as does their in-built wisdom and organisation skills. They are great at seeing projects to fruition, and their attention to detail is a bonus. They also have a great sense of humour, although it can be on the dry sarcastic side.

This sign has a tendency to take life quite seriously, they can be both controlling and judgemental. Believing that their way is always the best way. They like to live life by a set of standards and rules that they have made up, but expect others to follow suit. Capricorns do like to climb the world socially and in business, and can be shameless about using others to achieve their aims.

Capricorns like structure, they are prepared to work hard and long hours if needed. Some comforts from home in their office environment would be welcome. Caps take responsibility seriously, they are conservative in their dress and outlook. This star sign are very organised and keep projects and complex operations moving at full swing. Capricorns are trusted, but don’t necessarily make the best team players. They are kind, but their rule making/abiding can make them rigid. They respect people who are in positions of authority, they aim high and keep focussed on work, not office gossip. Their unflappable nature means they are well-suited to high pressure environments. They are often found in important roles, behind the scenes in organisations.

A Capricorn is interested in love and relationships, but they don’t find it easy. They can be awkward and shy around those that they like. They are not game players, if they flirt – it is because they are truly interested. Equally they would only say ‘I Love You’ if they really meant it.

Caps are committed and loyal as partners, they do need to feel secure especially financially to enjoy a relationship. They expect the details of their lives to be kept private and their partner must be faithful.

This zodiac sign wants to make a home, and family is important to them. To feel full loved a Capricorn needs to feel admired and taken seriously. There is nothing casual about a Capricorn, and they will try hard to make a relationship work, believing it a failure to walk away. Having said that if separation or divorce is inevitable, for example if a partner has cheated, then expect things to be over abruptly and with finality.

This sign is not known for letting children be children, they are disciplinarians, laying down a code of behaviour the child should follow from a young age. A Capricorn parent may struggle to show love through affection, they are more likely to reward the child for achievements.

It is quite likely that people will say the child is wise beyond its years. From a young age they will sense their duty to do well and to make their parents proud of their behaviour and achievements. They are likely to do well in conventional education environments, and will welcome challenges and competitiveness at school and at home.

Quite often Capricorns will only have room for so many people in their lives, family, a partner, work colleagues and a friend or two. So, you could quite easily find yourself in the ‘best friend’ position. This is a good thing as Capricorns treat their friends very well.

If a friend needed support and guidance, then Capricorn will help. The only caveat with this is if advice that has been asked for and given, is repeatedly ignored. They will remain friends, but they may not offer advice on the same topic again.

Capricorns don’t necessarily have a need to chat frequently with their friends, preferring to pick up where they left off the last time they talked or met. If the friend is willing to make suggestions as to when to meet and where then Capricorn will oblige with their presence.

As the Capricorn personality is geared towards achievement and success, it’s unsurprising that the sign has given way to success stories in every industry. Gary Barlow, Kate Moss, Kate Middleton and Orlando Bloom are all notable Capricorns, who demonstrate their signs high ambitions and determination to succeed.

If you were born under the protection of Capricorn this month, ask one of our Psychic Readers for more information on what’s to come. Each month we publish unique Horoscopes for Capricorns, so you can see what’s in store for your Star Sign now and in the future. We also have a series of posts that detail the Star Sign Compatibility with other zodiac signs.