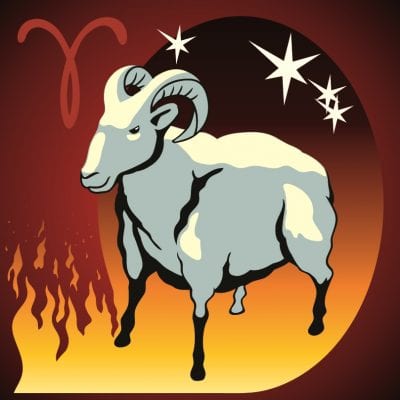 Those born between March 21st and April 20th are born under the Aries star sign. In this article we will be taking an in-depth look at the star sign, discussing its history and mythology as well as the unique traits of an Aries star sign.

The Aries star sign is controlled by the assertive Mars, the God of War in Greek Mythology. Similar to all the other star signs, there are many different myths and stories involving the origin of Aries. In Greek mythology, Aries was the name given to the ram owned by Phrixos. The ram safely carried Phrixos over the Hellespoint on its back. To show his ‘thanks’ he killed and skinned the ram, hanging its skin in the Grove of Ares, where its fleece turned gold. The rams Golden Fleece is thought to have been anxiously sought after by Jason and the Argonauts. When Jason acquired the fleece, Zeus placed the Ram in the sky, dedicating it to him. The Golden Fleece has been attributed to enlightenment and knowledge.

As the first sign of the Zodiac, unsurprisingly Aries are natural born leaders. Just like the symbol for Aries, they can literally ‘ram’ their way through life through sheer energy and assurance.

Aries take initiative and are fearless, with a thirst to explore the unknown in life. They crave adventure and are often found travelling and exploring the world. They are lively and energetic, and have no problem making decisions by themselves.

People often admire their independence, confidence and their no-nonsense attitude to achieving their goals. However, sometimes Aries self-assurance can be seen by others as over assertive or even self-centred.

Aries can often make mistakes through their impatient desire to succeed. Hasty and impulsive decisions can sometimes be rewarding but Aries can often benefit from learning to focus and think things through properly. Aries don’t get along with lazy people as they find they can stand in the way of their proactive attitude.

Aries have a great ability to make things happen. Whether it is a work project or something at home, they are ‘all in’. Luckily, they are also born problem solvers, so they will tackle any tasks with a can-do solution-based attitude. Their courageous nature, means they will take risks and are not afraid to be the first to try something new. They are generous by nature and enthusiastic about life. Whist they are natural leaders, they are very happy to enter in to a frank discussion with others, and they happily encourage freedom of values and opinions.

If it suits them an Aries can be less than truthful, bordering on manipulative. They do have a tendency towards selfishness. Whilst risk-taking is a positive attribute, there are times when they can be obsessive and take things too far. They can be too singular, not realising their actions will potentially impact others negatively. As characters they are restless souls, always in search of the next thing to do. On occasion their desire to have everything now, can lead them to a lack of perseverance and a dropping of projects if they cannot see an end in sight.

You might think that Aries would struggle with rules given their tendency towards independence, strong opinions and leadership skills, but in fact they take direction well from those above them at work. They may however collect along the way ideas about how to do things, and mistakes they have seen others make, perhaps using them to their best advantage at some point down the road.

Aries like tasks to be well-explained, so that they can do a good job, then don’t take well to criticism. They are motivated by money, and so overtime or bonuses can be used as an incentive to get an Aries to do tasks they otherwise might consider ‘not their job’.

Quite often others in a team will seek assistance from an Aries, and they are likely to be helpful in this regard. They like both the challenge, but also to feel needed and well-regarded. The only problem within teams, is that Aries tend to have strong opinions on other people that develop quickly. They will give someone a good first chance, but will then likely make up their mind, so as the saying goes ‘making a good first impression counts’.

An Aries character does have strong likes and dislikes, and so it is better to get to know them a little bit before dating. Knowing each other as friends may work best, blind-dates could go horribly wrong if the planned activity doesn’t suit…

In the early stages of a relationship you might feel that Aries is putting on a ‘bit of a show’, you will need to hang in there to get to the real person. They are charming and can sweep you off your feet. On the positive side, they are not unambiguous as characters, so it will be clear if they like you.

Aries are high energy, and they like a lot of contact with those that they are dating, when the are in love their character goes against their normal independent streak, and they can be quite needy (although they would hate to be thought of this way). They will depend on their romantic partner and want to please them and take on board their advice and opinions.

Arguments are inevitable in any relationship at some point, unfortunately Aries can be quite petulant and child-like, resorting to slamming of doors etc to make a point. Generally, for them actions speak louder than words, so in the end it won’t be about what was discussed in the heat of the moment, but what transpires after the fact.

In private Aries can be quite loving, but don’t expect a lot of public displays of affection – it is just not their way. They want to be more fun-loving, but often the seriousness of their demeanour slows them down in this area.

Aries want loyalty and honesty in a long-term union. They absolutely would not forgive any form of infidelity, although by contrast would expect to be forgiven for any transgressions they may make!

As a parent an Aries can be ‘too involved’! They will have a strong guiding light about how their child should behave and achieve and will not look kindly on any reason for venturing off that path.

Unlike in their romantic life Aries do tend to be affectionate towards their offspring. But that is matched by discipline – which they believe builds character.

As a sibling, Aries (especially if they were the oldest child), expect to be bossy and want to rule the roost for ever more… Aries are caring towards their brothers and sisters as long as their perceived authority is not challenged too much.

As a character trait Aries do not forget easily and as such childhood issues are likely to follow them into their adult relationships with their siblings. It will take patience on the part of the other siblings to overcome this, helped by understanding that it is not that Aries doesn’t want to let go – they just can’t.

Aries are not always the most thoughtful when it comes to family celebrations, you might end up with money as opposed to a gift and occasionally their busy schedule will stop their attendance.

Aries do respect the friend relationship, but communication and just generally keeping in touch is not their forte. You are likely to hear from them several times a year – a reminder that you are being thought of. Having said that, if you really needed them, then they will be there to offer wise counsel. Aries are always in forward motion and are unlikely to make a good friend if you want someone to gossip and chat with on a daily/week-to-week basis.

This star sign does not always turn off its ability to give advice, so sometimes you might get an opinion whether you asked for it or not!

Aries love an excuse to celebrate, and so you are more likely to have a fruitful meeting if a meal or party etc is involved, a cup of coffee at home on the sofa, is unlikely to inspire them to meet up…

Unsurprisingly, some of the most influential, charismatic and powerful celebrities have been born under the sign of Aries. Vincent Van Gogh and Elton John demonstrate the creative and inspired side of the Aries sign, while Thomas Jefferson and Quentin Tarantino show Aries strong ability to lead and direct. Other notable Aries include figures such as Lady Gaga, Andrew Lloyd-Webber and Diana Ross.

Many of our psychic readers are especially talented in astrology and can delve more into the Aries star sign with you. If you would like to learn more about your star sign and discover what is to come for you this month then visit our Aries horoscope page. Find out more about which star signs are compatible with Aries.