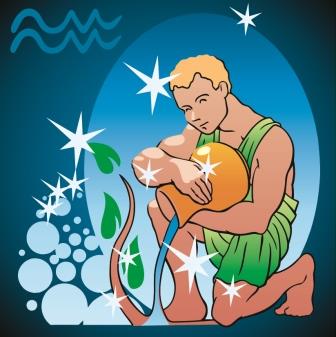 Those born between January 22nd and February 18th are under the Aquarius star sign. They are often said to be the zodiacs most mysterious and unusual people! Today, we will be taking an in-depth look at the star sign. We will discuss Aquarius history and mythology as well as the unique traits of an Aquarian.

Aquarius is the eleventh astrological sign of the zodiac. Originating from the constellation Aquarius the water carrier. Many ancient cultures have different myths involving Aquarius. In general the mythological significance of Aquarius relies heavily on the importance of water. The existence of all ancient cultures depended on the supply of water.

In Greek Mythology, Aquarius was Ganymede, the son of Tros, king of Phrygia. The god Zeus, admired the boy’s beauty so much he sent his eagle Aquila to kidnap the boy to serve as cup bearer on Mount Olympus. The young prince inspired Zeus to cast his image eternally in the night sky. Whilst this is perhaps the most well-known example, other cultures signify Aquarius differently. The Egyptians associated this time of year with the god Hapi. It was Hpi who was thought to be responsible for the annual flooding of the river Nile. In some images he is seen watering the earth from two large jugs.

Aquarians are said to be strong individuals who do not follow the crowd. They are independent, friendly and honest as well as being fiercely loyal. For these reasons, Aquarians are valuable friends who will not hesitate to be there if you need them. They make great leaders and work well in groups, and often have unusual thoughts and ideas. They are often looked upon as eccentric or unusual for their determination to not be like any other. However, because of their strong sense of independence, Aquarians can sometimes come across as cold or detached to those that don’t know them. Their unusual ideas can often cause them to be unpredictable and rebellious as they embrace their eccentric thoughts.

Aquarians are socially very conscious. They take a world-view and look at what they should do/be involved in now, to bring about change for future generations. They are natural evolutionaries.

Their tendencies towards eccentricity can hold them back. People may view their ideas as passing trends and not proper ideas to be considered. Sometimes this sign can get stuck in a rut. At the other end of the spectrum they will occasionally throw everything out as a result of a small issue. Put another way, ‘the baby is thrown out with the bath water.’

For Aquarians to be happy at work, they need to be in a job where their mind can be fully utilised. They need variety, and work well within groups. Routine is the enemy, and they don’t do well in positions that require them to make a lot of decisions. The Aquarius Star Sign is happier in places of work that allow for studious quiet environments, they are scientific by nature and embrace technology in all its forms. Jobs that require investigation, experiments and analysis suit them best.

When attracting a partner Aquarians may come across as aloof, but in reality, they are friendly and open characters. Friendship is deeply important to them and most significant relationships are likely to start there. They are not great with emotional attachments, and so guard their independence fiercely. Relationships that thrive are likely to be where each person is happy to do their own thing some of the time, coming together with common interests.

In a relationship Aquarians have a tendency to want to dominate, whilst at the same time having great freedom. A partner who shows jealousy or who requests too much time is likely to be cast aside quickly.

Once Aquarians are in a committed relationship, they are truly loyal and faithful. They will do very well if they find a soul-mate that is willing to overlook their foibles.

As parents Aquarians really embrace the child’s individuality, encouraging them to be who they really are from a young age. They want to do the best for their child, and will likely do a lot of reading on the subject, this may mean they try out some odd practises if they think it will influence the child in a way that pleases them – such as academic ability. They can be quite unpredictable as parents, unless centred by a partner.

Aquarian children do well with educational settings that are outside of the norm, encouraging all of the Aquarian traits like experimentation, inquisitiveness, analysis, and interest in Science etc will guide them from a young age. Having said that though, they thrive the most when in a stable situation providing routine.

Aquarians often have unusual hobbies, from Science Fiction to Graphic Novels (comics), Astronomy, Paranormal Studies and so on. They are also often interested in IT, politics as well as charitable work. They do well when friendships are based on shared interests.

Those of an Aquarius Star Sign usually have many friends, those that they meet up with to carry out shared activities and hobbies, but the may have only a few people they would actually confide in.

As people Aquarians bring fun, practical support/guidance and mental stimulation to relationships. But friendships last best when there is a shared ethical belief system.

Famous Aquarians include figures such as Oprah Winfrey, John Travolta, and Bob Marley, all of whom are noted for their individuality and strong characters which perhaps could be attributed to their success. When taking into account unpredictable and rebellious Aquarians, James Dean can be seen as a classic example of an Aquarian who did not follow convention.

If you would like to discover more about what is in store for Aquarians, then don’t forget you can visit our Aries Horoscopes page which is updated every month. If you were born under the Aquarius Star Sign and would like a reading tailored to your astrologic sign, then you can read Our Psychics profiles to choose the best person for your circumstance. You may also be interested in the compatibility with Aquarius and other zodiac signs.