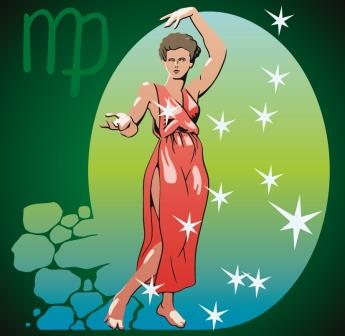 Those born between August 22nd and September 22nd are born under the Virgo star sign, the sixth sign of the zodiac. As with previous posts, we will be taking an in-depth look at the star sign, discussing its history and mythology as well as the unique Virgo traits.

There are many stories surrounding the origin of Virgo, however one well-known Greek myth reveals Virgo is the celestial incarnation of Astraea, the Goddess of Innocence and Purity. Astraea, daughter of Themis and Zeus, lived on Earth in the Golden Age, but as humankind grew more violent and unbearable the gods abandoned this world and retreated to the heavens. Astraea was the last of the immortals to leave. She was immortalised in the sky by Zeus as the constellation Virgo. In another myth Virgo is named from Demeter, the earth goddess, celebrating the arrival of spring and the growing season.

Virgo originally comes from the Latin for ‘self-contained’ which is possibly better interpreted by us as ‘self-sufficient’ and those born under this sign are independent and individualistic. They are extremely nurturing and care greatly for the needs of others, willingly making sacrifices for those less fortunate.

They are often perceived as being picky, critical, and fussy, when in fact they are just striving for perfection. As friends, Virgos are fiercely loyal and will always be there in times of need to offer advice and companionship. They take their responsibility towards their relationships and family very seriously.

Creative and intelligent, Virgos are an asset to any workplace and many Virgos will be found in ‘service to others’ industries from school teachers to doctors.

A Virgo will analyse every detail before deciding, which can sometimes make them seem indecisive and slow. The negative Virgo keeps a tight rein on their emotions, preferring to keep them out of decision making. While this allows them to make decisions objectively, some may perceive them as being cold or unfriendly.

When in a critical mood, Virgos can pick at minor errors and the faults of others, making them miss the bigger picture.

Virgos are very practical, they have plenty of common sense, they have an eye for detail and enjoy focusing in on things. They are creative, efficient and they go about their lives with integrity. They have a quiet strength about them, and their reserved nature allows them to support and be there for others.

In some cases, their strengths are also their weaknesses, their attention to detail can be obsessive, and their attitude can become blinkered or even pedantic. They are there own worse critic, sometimes having a high-handed self-righteous attitude, coupled with high expectations and unachievable goals. Not being able to meet impossible standards leaves them at risk of low self esteem and periods of self-doubt.

Virgos does well in supporting roles in the workplace, they provide much needed stability to a team. Their self-discipline and meticulous behaviours make them great at complicated routine activities. If they rise to a position of authority, they are likely to be considered quite blunt – they will tell things as they are! They will be well-presented, with good manners, they are firm but fair and above all honest. They like complicated projects and believe in decent pay for good work.

For Virgos love is more about devotion, they are not dramatic individuals by nature, and so overly sentimental attitudes or over emotional behaviours are not usual for them. They want a quality relationship, they want steady warm love, not game-playing and outright lust. Once connected they will not want to break-up and they are unlikely to cause a partner to have a need to be jealous. In return they do expect to be ‘fussed over’, they want confidentiality to be an integral part of the relationship. Their feelings should be considered and handled with extreme care.

Virgo children are often organised and tidy even at a very young age, they are most comfortable when they know where all of their belongings are! They will learn from copying, and they are practical by nature. They are attracted to nature and the outdoors, but oddly don’t normally like to get dirty, but they will likely make an exception for playing in the earth and later for gardening. They do like doing things with their hands, so any crafts will appeal.

Virgo parents are planners, they care greatly for their family and want to map out a future for their children. Although they have their children’s interests at heart, they can make for tough parents to please, as they will set very high standards, and will be disappointed if they are not achieved.

You would be extremely lucky to have a Virgo friend, they are very loyal, helpful and supportive. Virgos seem to instinctively know when to turn up, even if they have not seen a friend for a while, a Virgo will not forget – they will still be considered a friend and help will be offered. It is never a case of ‘out of sight, out of mind’. Virgos themselves on the other hand do not find it so easy to ask for help directly – so if they do reach out, they want the approach to be taken seriously.

Like in other areas of their lives, Virgos are direct in their communication, so it is good for others to know that is their approach before seeking counsel and advice. They are analytical and logical, so they are likely to come at any problems from this angle, and may not be so helpful when any emotion needs to be factored in.

Virgos often turn to music or acting in order to overcome their inhibitions, and when this is combined with their ambition, it is unsurprising that Virgo has given way to some of the most successful and creative stars that have ever lived.

Pop superstars Michael Jackson, Freddie Mercury and Beyoncé were born under the Virgo star sign, alongside Cameron Diaz, Hugh Grant and Sophia Loren whom all made their mark with their notable performances on the stage/screen. Other influential Virgos include Stephen King, Mother Theresa and Prince Harry.

If you would like to learn more about your star sign, and discover what is in store for you this month then you can visit our monthly virgo horoscopes page. Many of our Psychic Readers are especially talented in astrology and may be able to tell you more about what the future holds for all the Virgos out there. You can also explore more about what star signs are compatible with Virgos romantically.