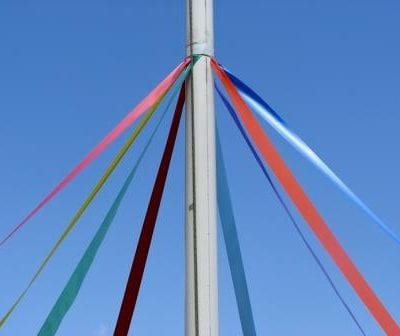 The first day in the month of May, commonly referred to as ‘May Day’ is a spring festival. It is a public holiday that has been ongoing for the past 2000 years, usually only celebrated in the Northern Hemisphere. May Day is around the time of year that warmer weather begins and people celebrate the coming of summer.

The 1st of May is perhaps most commonly known as May Day, the day is also related to the ancient Gaelic festival ‘Beltane.’ Just as April Showers give way to rich and fertile earth, Beltane was also celebrated as a sign that summer was just around the corner.

The word ‘Beltane’ literally means ‘shining fire’ and ancient Celts recognised the Beltane festival as a season of fertility and fire. People usually celebrated in the light of day hoping for a fruitful year for their families and their fields. It was honoured with flowers, food and dancing, but mainly involved the lighting of fires to mark the beginning of summer.

For many Wiccans and Pagans the 1st of May is still as significant as ever. Many of the customs associated with the Beltane festival are practised today. Around the beginning of the 20th Century, Beltane morphed into the popular secular celebration of May Day. Similar to Beltane, young men and women gathered to dance around a decorated tree known as a ‘maypole’ which represented the tree of life. Traditionally, they would tie colourful ribbons around the tree and dance around it holding on to the ends of them.

The day was also celebrated with a procession, led by a young woman who had been appointed ‘May Queen.’ She would not take part in the dancing and games, but sit and watch. She was sometimes joined by the ‘May King’ who would dress in green symbolizing fertility.

Today May Day is celebrated as an annual bank holiday, with some places starting celebrations at sunset on the 30th of April with processions and village gatherings. Modern May Day celebrations include parties, sing-alongs, and parades. However Old-World traditions such as the maypole and Morris dancing still carry on in many places.

Whilst Beltane may have largely died out by the mid-20th century, we can still celebrate the message of new beginnings that May Day offers.

Spring Equinox was seen by the Celts as a time of regrowth and renewal, a harvest period that celebrated fertility and a coming to fruition of seeds sown earlier.

So, now in life we can use this ancient celebration to review the hopes and dreams we had for 2019. Let’s see if our plans are on their way to fulfilment. If they are not, then we can sow new seeds of hopes and dreams during this magical time harnessing the Earth and Sun.

The 1st May was a festival of the Shining God – Belenos. His role was to ensure fertile and healthy land that was disease free.

A lot like Samhain (Halloween), this time of year also encourages the veil between our world and the next to become thin, so that intuitive communications are that much stronger.

Beltane was a fire festival, there were many reasons for the fire:

Spring cleaning – in the sense of cleansing herds of insects and animal winter bedding.

Bale Fire – meaning funeral fire, was traditionally built from nine different woods. That cumulated in a growing light that symbolises the coming of a strong summer.

Farmers may have guided female cattle through the fires to encourage fertility. People would jump over them to help their own fertility as well as their finances and luck.

The May Day period is considered to be prosperous. Herbs, trees and flowers were often associated with different ways of boosting luck. For example, Birch for abundance and love. Hawthorn for attracting a partner, increasing sexuality and ultimately fertility. Rowan for protection and healing.