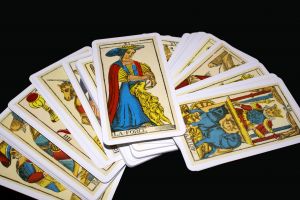 Have you ever wondered how our readers put together a tarot card reading? Or ever wanted to learn the basics for yourself? You’re not alone! Tarot has become a popular way for people to tap into their own intuition and help give guidance on what is happening in their lives. With 78 cards to work with, Tarot can be a little overwhelming and if you have just been introduced to it then it’s not uncommon to feel confused about how to use and interpret the cards. Here’s a little insight on where tarot came from and how the cards work…

Tarot cards were first used in the mid-fifteenth century in parts of Europe, used to play games for entertainment. It was only from the late 18th Century that the cards came to be used by psychics to offer readings of peoples past, present and potential futures.

A typical deck of Tarot cards contains 78 cards, there are many different varieties of the cards, and the decks differ from country to country. The most widely used deck for English speaking countries such as the UK and America is the Rider-Waite deck. The deck was illustrated in 1909 by Pamela Coleman Smith under the guidance of A.E Waite, an academic and prominent member of the Hermetic Order of the Golden Dawn. The cards are still used to this day, and at Psychic Light, we have a number of experienced readers who can give you an accurate Tarot reading.

As mentioned earlier, the Rider-Waite deck of Tarot cards is the most widely used in the UK, and the one you will most likely come across. The deck is made up two parts, widely known as the Major Arcana (consisting of 22 cards) and the Minor Arcana (56 cards). The Minor Arcana represent the minor ups and downs of day to day life. Its format is similar to that of regular playing cards, numbered from 1-10 with four Court cards (Page, Knight, Queen and King).

However, instead of having the 4 suits of hearts, diamonds, spades and clubs, the suits are known as wands, swords, cups and pentacles. The Major Arcana represents more significant life events and is not made up of suits, but numbered from 1-21, with “The Fool” card numbered as zero. During a reading, both decks of cards are shuffled together and then laid out in different ‘spreads’.

The best-known spread is the 11-card Celtic Cross, however depending on the question you want to ask there are endless spreads that can be used however if you want to start out with a simpler approach, you can select just one card to answer a question about a specific person or situation. The different spreads are interpreted by looking at the cards positions and their relation to each other, and each position in a Tarot spread has a significant meaning that will relate your life.

Having a Tarot reading done can give you guidance and clarity of mind that can help when it comes to making important decisions, as well as the possibility of finding out what is yet to come. You can interpret a Tarot reading however feels best for you and the cards can take on personal meanings in relation to your life. They are a fun and insightful way to tap into your hidden thoughts, feelings and emotions, allowing you to make important decisions about life, love, health and career.