What is my Birthstone for July, Aug & Sep

Home » Psychic News » What is my Birthstone for July, Aug & Sep 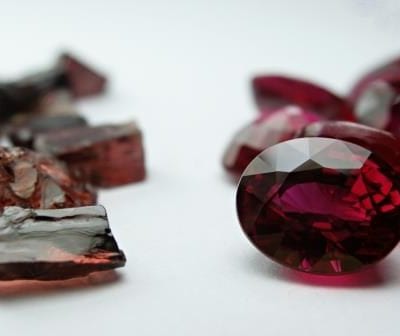 For those born in the month of July, the traditional birthstone is the bright red revered ruby. The ruby is held in high esteem amongst the other birthstones as a symbol of love, strength, power and luck.

“The gleaming Ruby should adorn, All those who in July are born, For thus they’ll be exempt and free, From lover’s doubts and anxiety.”

Ruby is a red variety of the mineral corundum and is considered one of the most valuable gemstones.

Not to mention their exceptional hardness of 9.0 on the mohs scale, is surpassed only by diamonds. As a result it makes rubies extremely durable to wear.

The word ‘ruby’ comes from the Latin translation of ‘red’ (ruber) which attests to the ruby’s striking natural colouring.

Fine quality rubies are extremely rare to find and their value directly relates to their colouring.

Rubies are normally found ranging from pink-red to a vibrant deep red. The most noteworthy and valuable are those coloured medium or medium dark vivid red or slightly purplish red.

Certainly Rubies are found throughout the world, probably the most important source of rubies though, comes from Burma. Which is famous for producing fine quality vivid coloured rubies.

History, myths and legends surrounding the spiritual properties of ruby have been handed down through the ages from different civilisations. The allure of the ruby has been revered by those in power for centuries.

Worn by Kings and royalty to protect them from evil, the ruby is believed to bring great fortune and luck. They are thought to have an ability to turn deeper in colour, to indicate danger or misfortune to the wearer.

There are many positive effects and spiritual properties to wearing the July birthstone. As a result, the ruby is held as a symbol of powerful feelings, which include sentiments of love, energy, passion and power.

Legend has it that the owner of a ruby can walk through life protected from fear of harm or evil. Arouse your senses and use your birthstone in healing or meditation.

Rubies stimulate the heart chakra – their striking red shade associates with blood and vigour giving you a zest for life. At the same time they offer a calming effect from feelings of exhaustion and hyperactivity.

With its strength, beauty and durability, ruby birthstone jewellery is a popular choice amongst some notable wearers.

Celebrities born under the protection of the ruby include Tom Hanks, Liv Tyler and Ringo Starr.

Can there be a better way to demonstrate your love? Than by giving a ruby in celebration of a July birthday.

For those born in the month of August, the magical, healing Peridot is the traditional birthstone. The striking August birthstone is associated with love, truth and faithfulness. As well as loyalty, attested to in the below poem.

“Wear a Peridot or for thee, No conjugal fidelity, The August born without this stone, `Tis said, must live unloved alone.”

It is thought the name ‘Peridot’ originally comes from the Arabic word faridat, meaning “gem”. Furthermore it’s believed the word comes from an alteration of the Anglo–Norman pedoretés. Which is the meaning for a kind of opal.

Peridot is a gem-quality variety of olivine – a mineral that is composed of magnesium-iron silicates. They are one of the few gemstones that only occur in one colour, a bright, transparent lime green.

The colour is one of the reasons they are sometimes mistaken for emeralds.

Geologically, Peridot is most commonly mined in Arizona, USA. However other sources include China, Myanmar and Pakistan.

Peridot is amongst the oldest known gemstones, it has been revered since ancient times as the symbol of the sun. For ancient Egyptians, Greeks and Romans, the Peridot was a popular choice of gemstone.

Used for many things from playing games to jewellery or warding off evil spirits. In fact, the Greeks even believed that the stone brought royal dignity upon its wearer.

The ancients were right in their use of Peridot for its spiritual properties. As this powerful stone is a great protector against negative emotions. Alleviating jealousy, resentment, hatred and greed and putting them in a place where they don’t interfere with your life.

It can also give you a better understanding of the relationships in your life. Protecting you from heartache and clearing your thoughts, allowing you to see them in a different light.

Physically, the Peridot provides a shield around our bodies, whilst at the same time strengthening the immune system and metabolism. It has assisted in giving birth, regenerating tissues and organs, and even strengthening one’s eyesight.

This warm, friendly stone will help with all kinds of compulsive behaviour. Such as addiction, alcoholism and is particularly useful for insomnia.

Arouse your senses and use your birthstone in healing or meditation. Peridot sends its energies to the heart chakra, saturating it with positive energy and encouraging mental, emotional, and spiritual growth.

Peridot can help the wearer working on the heart chakra to learn to live from the heart and experience love.

The eye-catching lime green Peridot, makes it a popular gem used in birthstone jewellery. The very spiritual may want to wear Peridot on the body at the level of the heart chakra.

Including Peridot in a necklace or pendant can be a great choice. Wearing the stone at the base of the throat can activate its soothing effect.

Some celebrities swear by the virtues of their birthstone, with Peridot being a particular favourite. The month of August includes notable birthdays of figures such as Barack Obama, Charlize Theron and Halle Berry.

Peridot works at its strongest for those born in August. So, there is no better gift than this cleansing crystal for someone who is celebrating a birthday in August.

For those born in the month of September, the deep blue Sapphire is the traditional birthstone. This prized gemstone is associated with trust, loyalty, wisdom, faith and understanding. In addition to providing physical and emotional balance.

“A maiden born when autumn leaves Are rustling in Septembers breeze A Sapphire on her brow should bind; To bring her joy and peace of mind”.

The name sapphire is derived from the Greek word “sappheiros”, which means “precious stone”. The sapphire is a member of the Corundum (aluminium oxide) family. I

t is the second hardest crystal Mother Nature has ever given us.

It is one of the four precious gemstones alongside diamonds, rubies and emeralds. Blue sapphires occur in a range of shades from very light to very dark green to violet and pure blue.

The most prized Sapphires range from medium to medium-dark blue.

Sapphire was, in fact, one of the earliest gemstones known to man. The ancient Persians once believed that mother earth rested on a giant sapphire, with its striking blue colour reflected into the sky.

Many other cultures spoke of the Sapphires magical healing properties.

The stone has been traditional in royalty throughout the ages, with Princess Diana and Princess Anne both receiving sapphire engagement rings. Used as a symbol of pure and wise rulers.

Even to this day sapphires are still used for their healing properties. Thought to relax and clear the mind, sapphires protect their owners from envy and ill health.

Known as the wisdom stone, the pure blue ray of the sapphire improves concentration, mental clarity, strength and focus.

The sapphire is a royal stone of psychic activation. Which can facilitate our connection to our angels and spirit guides.

Physically, the Sapphire promotes general good health. Hence, it’s been used since ancient times in the healing of the eyes. It is also thought to effectively soothe and sharpen our sight. One ancient recipe for eyesight was to powder the stone and mix it with vinegar.

Sapphires are popular meditation stones. They help to calm the mind and connect us to the universe. Used to develop and stimulate the throat and third eye chakras.

Sapphires are also associated with out of body experiences as well as telepathy, which allow us to reach deeper levels of consciousness.

The eye-catching pure blue sapphire makes it a popular gem used in birthstone jewellery. Furthermore, if worn at the throat, they will certainly facilitate creativity and self-expression. As a result you may want to invest in a sapphire necklace.

Due to it being hard and durable as a diamond, sapphires are consequently also extremely popular in rings, bracelets, and earrings.

Some lucky celebrities who have been born under the sapphire birthstone this September include notable Royal Prince Harry. These well-known people also have September birthdays – Pippa Middleton, Beyoncé, Gwyneth Paltrow and Will Smith.

Sapphires work at their strongest for those born in September. Therefore it will prove to be an excellent gift for your beloved. Allowing you to express your love, trust and respect.

Certainly this radiant bright, blue sapphire will be greatly appreciated.

Finally, if you or someone you love was born under Ruby, Peridot or Sapphire Birthstones. Then Psychic Light would like to wish you a very Happy Birthday!

Maybe, you are also interested in the Birthstones for the other months of the year? Then, why not look up the gems associated with January, February & March – Garnet, Amethyst and Aquamarine. As well as April, May and June – Diamond, Emerald and Pearl. Or maybe even October, November and December – Opal, Topaz an Aquamarine.

In conclusion, if require more information, we have gathered a team of highly practised telephone readers, who offer a wide range of psychic reading styles.